Posted at 11:38h in News by Sophie Bourdon 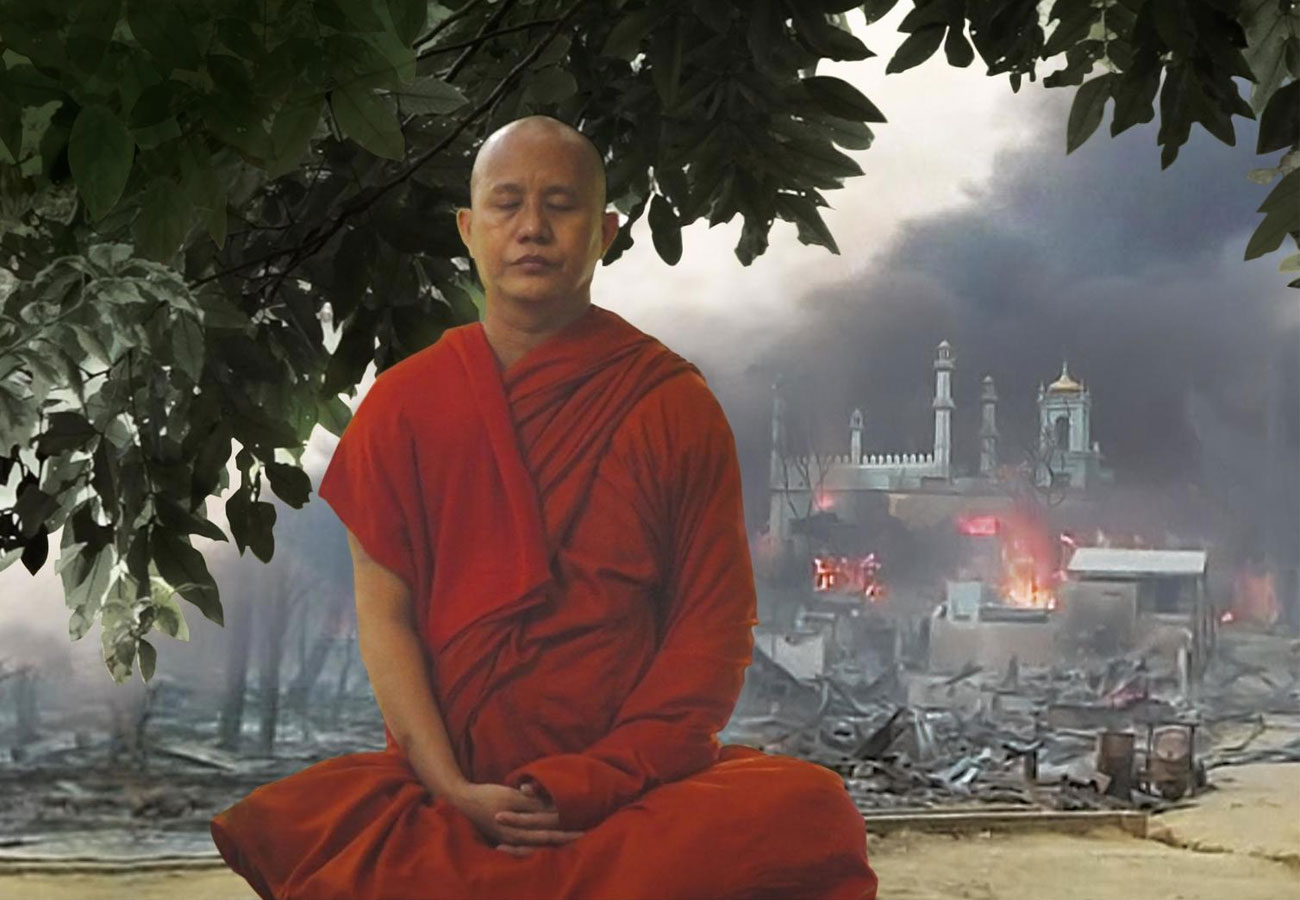 The Venerable W is the controversial documentary by Barbet Schroeder (WP Cannes 2017) about the controversial Buddhist monk and anti-Islam rhetorician Ashin Wirathu, living in Myanmar. The film was made in secret under the noses of the Burmese military government, hence the idiosyncratic workflow.

“It is a project which could be easy to manage but the tricky part was that I was not always within the process, but for very good reason,” François stressed at the beginning of his presentation about Schroeder’s film. Given the inherent danger of the enterprise (and the threat that the subject himself constituted) the production was highly confidential from start to finish.

It all started with a phone call from Schroeder, for whom Noir Lumière had done some work in the past (advising him on camera settings for video to film transfer). This time the director asked them about settings for shooting with DLSR. That was all. No other info was divulged. Nothing about Myanmar, nor dangerous monks.

Schroeder had chosen to shoot with two simple Sony Alpha Seven S cameras (which would suit the tourist persona that Schroeder had adopted to enter Myanmar). He had already asked his students in Lausanne to make a settings proposal. They suggested HD 25fps, which are the basic settings for this camera. François’ first question was: which type of release? Is it for theatre? TV? Web? First for cinema, and then for broadcast/DVD, was Schroeder’s answer.

At this stage François had no idea if it was a documentary or a fiction feature that Schroeder was looking to shoot, but either way the students’ suggested settings weren’t enough. For the Sony Alpha 7 you can make 4K video and Beta colour space so he decided to utilise this capability, given the film’s end destination.

“I changed it to UHD, close to 4K, and changed the colour space and decided to shoot in log because you have more headroom in highlights and the colour space is larger. I also managed the output in the viewfinder because if you leave the settings like that you will see the log colour space on the viewfinder, which shows as a grey image and is not easy to manage when you want to make a correct exposure. But the camera has the settings to correct it, so then you can expose.” François also switched from 25 fps to 24 fps as the film was for digital cinema release and would need subtitles (there are issues with subtitles at 25 fps).

The next question was about back-up and data management of the footage. All that Schroeder told François was that he was shooting in a dangerous place, and that the authorities may confiscate materials. When you are copying files an integrity check is essential to ascertain that the copy is always exactly the same, François underlined. Sometimes in the copy you will lose some data and you only find this out at the end.

He therefore settled on Silverstack for data management and dailies, which is very easy to use, and you can make several secure copies at the same time. With Silverstack he could play back files and make a basic QC. He also set out to teach Schroeder himself how to use it. For the data they decided to use three hard-drives stored independently for security.

They made camera tests and settings at TSF in Paris, and François was introduced to the director’s partner Victoria Clay Mendoza, whose knowledge of camera operation was superior to Schroeder’s. They did some exposure tests in order to work out what was needed for a terrain that offered high contrasts, and to determine how to expose correctly (François still had no idea that the location was Myanmar).

As Schroeder wanted to shoot slo-mo footage François found a solution inside the camera to film at 120 fps (even if wasn’t HD). For the process of corformation it was very important to have unique files on the 13 SD cards used, so a naming convention had to be applied (via Silverstack), made up of a unique letter and number plus shooting date, card letter and card content.

Shooting started in March 2016 at which point François found out Schroeder was going to Myanmar, part of a three-person crew (plus Emilie Bickerton, camera assistant and data assistant). François’ first question was how they would send the footage to France. He tried to locate a local post-production facility in Myanmar to make a transfer but it was impossible to find a place which wasn’t controlled by the Burmese army. They tried web cafés, but again they could not guarantee neutrality. So they made a test with basic DHL courier delivery, and it worked within 48 hrs. SD card, small envelope. All cool.

The next step was how to communicate with, and offer support to, the director who was on the other side of the world with limited technical skills. François managed to take over Schroeder’s computer in Myanmar using Team Viewer, a very good tool for remote control of a third party device. It was slow but it worked.

After 5 days of shooting Noir Lumière were told they were officially the shooting lab for the film, and would be in charge of dailies, Q-check, metadata check, back-up, transcoding and conformation. At which point François began to receive real footage. This was when he began to suspect that the film was a documentary!

He then met with editor Nelly Quettier, a close collaborator with Schroeder having worked on his previous three films, and together they decided on DNX files as she was editing on Avid Media Composer. DNX HD115 offers excellent and comfortable compression for test screenings, he stressed. At which point François started work on the dailies; pregrading, transcoding, securing data and transferring the DNX files through the internet or via hard drive.

But suddenly he received a call saying everybody was coming back home immediately. Why? Because Schroeder had received an SMS to say that the military was suspicious of his behaviour. This marked the end of the first part of the shooting.

The director returned with a hard-drive of archive material which had to be managed for use in the documentary, made up of a mix of different codecs, frame widths and resolutions. But the hard-drive was inaccessible as everything was written in Burmese, whose characters were not recognised by systems like Windows or Mac. But the Linux operating system did – so they used this for the ingest.

A second shoot was needed, but as Schroeder could not return to Myanmar the production decided to relocate to Bangkok and arrange for the subject’s (the monk’s) delivery there. The team now consisted of just the director and Victoria. Four weeks in August. Same configuration. Silverstack plus Team Viewer, but in Thailand the bandwidth was so superb that remote control of Schroeder’s computer was seamless. What’s more they were able to send the data using the hotel internet (via Aspera, secured FTP). The camera was shooting at 100 megabits per second, so it meant that an hour’s worth of material would take just two hours to transfer to Paris.

François’ man-hours were increased considerably by the arrival of additional footage coming from different confidential personal archives. The 8 terabytes of material arrived via a Tupperware box, which contained a raw hard-drive (written again in Burmese – this was when Google Translate came into its own), consisting of 10,000+ hours of footage (in multiple formats), 50,000+ photos and loads of pdf and word files. François had 3 days to manage all that, to make a QC and to reference all the files.

(At this point he found out the real name of the monk – Wirathu – but was told by Schroeder never to mention this name in correspondence. Refer to him only as W.)

This new resource archive was treated as new (and gold-dust) material for the film so they decided to create an Oncloud platform (Dropbox-type system but private) to log the footage, reference and manage it, transcoding it all in the same MP4 codec, and to exchange with the (newly employed) translators. The material cloud be played within Oncloud without having to download the files. Schroeder had enlisted the services of three translators, one in Burma, one in France and the other in the UK. These were granted access to the Oncloud material.

Schroeder edited the film with Nelly in his house in Ibiza, cut from 87 hours of footage that he filmed himself as well as the archive material. Nelly used a superb high-quality Sony 24-inch Oled screen to see the material, as archive needs care and she wanted to make sure she missed nothing. It is not usual to have such a good screen in an editing suite, François underlined. After six months of editing, the production moved to Switzerland for the grading (the film was co-produced with Switzerland).

Data had to be exchanged therefore with the Swiss company Andromeda Film as they were making the VFX. During the second shooting Schroeder had shot W against a blue screen in Thailand, and subsequently a lot of VFX, pre-morph and keying had to be applied to the images, plus motion design and animation.

All the material was put together for conformation on Da Vinci Resolve, gathered from the editor (who was on Avid Media Composer) and using AAF to extract all the metadata. François also incorporated the archive footage from Oncloud as well as material directly taken from the Avid output. This was all sent to Andromeda.

François was then advised that there would be multi-language versioning (French, English, German), so he organised everything in layers to make a textless version and then layered versions for the different languages.

It was decided to make a 2K DI, at which point François could produce all the deliverables, and very soon two DCPs as the film was selected for Cannes (one French-language DCP, the other in English). The German one came later.

To define François’ achievements, it was a very sensitive documentary shooting with a DSLR camera, dealing with archives and main players who don’t work within the techy world. There was always a genuine risk to their lives and a real risk of losing all the footage. The production also comprised multi-file types, including archives.

What is important is to note how a lot of countries were involved, and the consequences of/for international co-production when heads of departments are in different countries, thus leading to different (post) production strategies. Also interesting was how the distance between the shooting location and the lab/editing room changed fundamentally the design of the workflow.